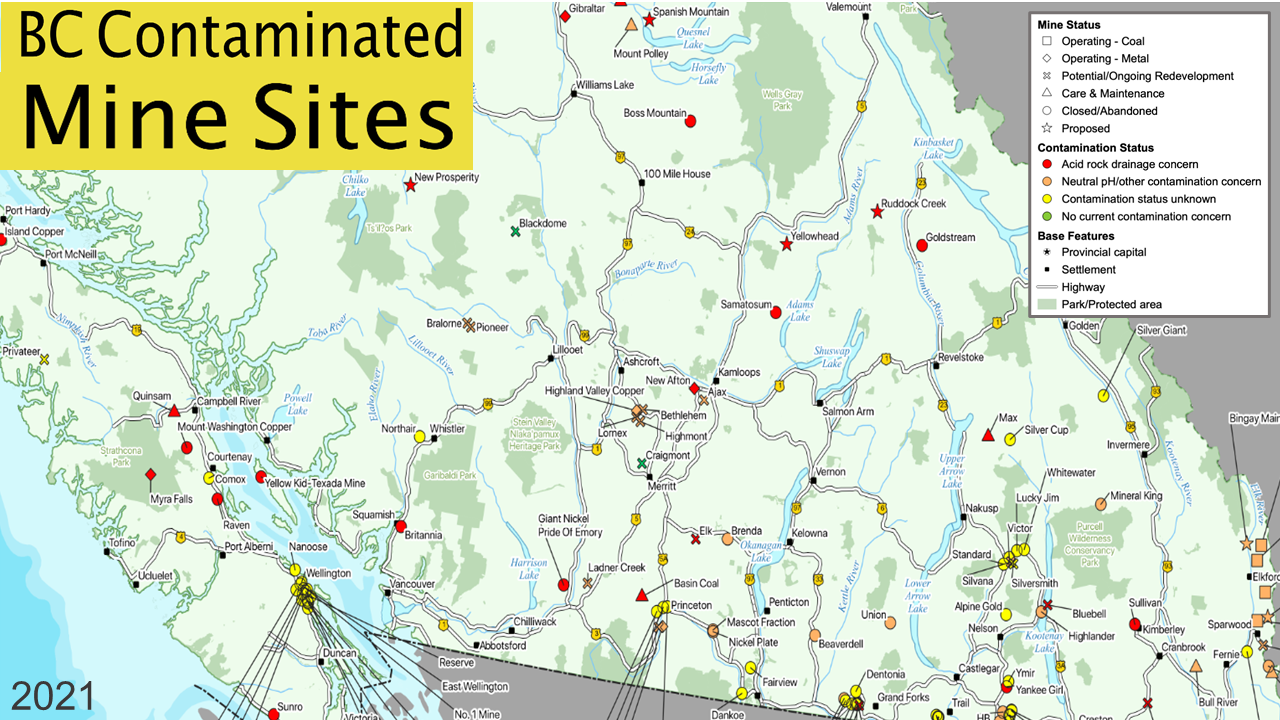 Vancouver/Terrace – Today, SkeenaWild Conservation Trust and the BC Mining Law Reform network released new maps pointing to over a hundred known and potentially contaminated mine waste sites that threaten to pollute waters, fish habitat and communities across the province.

Concerns over mining have been growing since the 2014 Mount Polley disaster and 2016 Auditor General report calling for significant reforms to protect B.C.’s waterways and communities.

Mining poses risks of water contamination from acid mine drainage and heavy metal and pollutant leaching. At times this can result in the need for water treatment in perpetuity which can cost taxpayers millions, as with the Britannia Mine that has cost $40 million for clean-up to date and an additional $3 million annually to reduce acid mine drainage and heavy metals from entering Howe Sound.

The BC Mining Law Reform network represents 30 local, provincial and national organizations from a wide range of sectors calling for reforms to B.C.’s weak mining laws, and a lack of enforcement and oversight in a context of increased demand for minerals.

“The information on the map was challenging to uncover. How can we begin to investigate these potentially mine-damaged waters and monitor the extent of the pollution, when the information is not even available to the public?” asks Knox.

The Association of Mineral Exploration of B.C. (AMEBC) is hosting their annual conference RoundUp online that will include a session on the growing importance of Environmental, Social, and Governance (ESG) investing on January 21.

“There are a few key reforms B.C. needs to make around mine tailings safety and water protection, and ensuring that the polluter actually pays before it can promote itself as a responsible mining jurisdiction,” said Skuce.

View the maps of B.C. and Northwest B.C.

Five Examples of Ongoing Mine Water Pollution in B.C.: