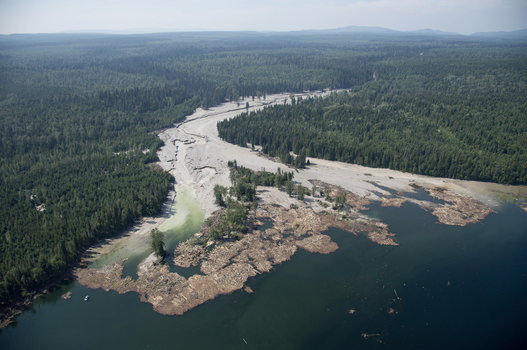 Vancouver – New expert analysis reveals that British Columbia is lagging behind other jurisdictions in Canada and globally when it comes to mine waste safety. The report looks at the B.C. government’s first ever Audit of Code Requirements for Tailings Storage Facilities, released last year, and makes recommendations on how to improve existing laws and regulations on mine waste safety to protect communities and the environment.

The report, produced by the BC Mining Law Reform network and MiningWatch Canada, is being released on the first day of the annual AME Roundup mining conference. It is intended to inform the B.C. government and the ministerial Code Review Committee currently revising the Health, Safety and Reclamation Code for Mines in British Columbia.

“B.C. touts itself as a responsible mining jurisdiction, implementing best practices and the highest international standards,” said Ugo Lapointe, BC Mining Law Reform network co-chair and National Program Co-Lead with MiningWatch Canada. “But the reality is that we still have out-of-date laws that will not adequately protect communities or the environment from mine waste disasters like we saw with the Mount Polley mine’s dam breach in 2014.”

Nikki Skuce, Co-Chair of the BC Mining Law Reform network and Director of Northern Confluence Influence, said, “The province has seen floods, heat domes, wildfires and atypical weather events due to climate change, which are likely to escalate. B.C. must ensure – by law – that mines and waste dams are designed to withstand such extreme weather events. B.C. must also avoid putting dangerous mine waste sites upstream from communities or sensitive watersheds, and follow the lead of other countries such as Brazil, Chile, Peru, and Ecuador that have banned upstream dam technologies, which are known to be much riskier, especially in high seismic and precipitation areas like we have in B.C.”

Key recommendations from the report include incorporating regulatory standards that will clearly prioritize safety over cost considerations; planning for extreme weather and earthquakes; utilizing best available technologies and practices, including filtered tailings and no wastewater covers at closure; and requiring mine operators to cover all costs, including in the event of disasters, not just for planned closure. There are also recommendations to ensure transparency and accountability and to require Indigenous consent, in line with the Declaration on the Rights of Indigenous Peoples Act (DRIPA), passed by B.C. two years ago, but not yet incorporated into mining regulations (see last week’s groundbreaking report by the B.C. First Nations Energy and Mining Council on this issue).

Contributors to the “Bridging the Gap” report will be attending various sessions of the AME Roundup mining conference this week, including the Environment, Social and Governance (ESG) best practices session on February 3.